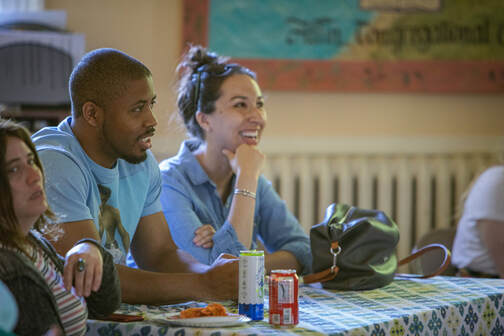 When Jesus showed up at the lake shore, where a band of fishermen were mending their nets, he didn't do a background check on his soon to be followers. Instead he said only two words "Follow me."

To be a disciple of Jesus Christ means following Jesus even though it is often uncertain and even ludicrous and always treacherous. The fishermen, who later witnessed the risen Christ on that first Easter morning, had no assurances as they followed Jesus through the dusty Galilean countryside or sat at the foot of his cross. They received only an invitation: Follow me.

Two thousand years later we receive the same invitation daily. We are a community emerging from this invitation, as a gathering of those trying to follow Jesus (even though on most days we do an imperfect job). Church should not be about buildings, fund raisers, committees, and certainly not about who is in and who is out. Church is about discipleship; discipleship is about following. For these reasons we have decided not to be your grandmother's church, but an emergent christian community filled with disciples.